Coriolanus, Roman General and newly appointed Consul, must decide which is most important to him: Honor, or pride? 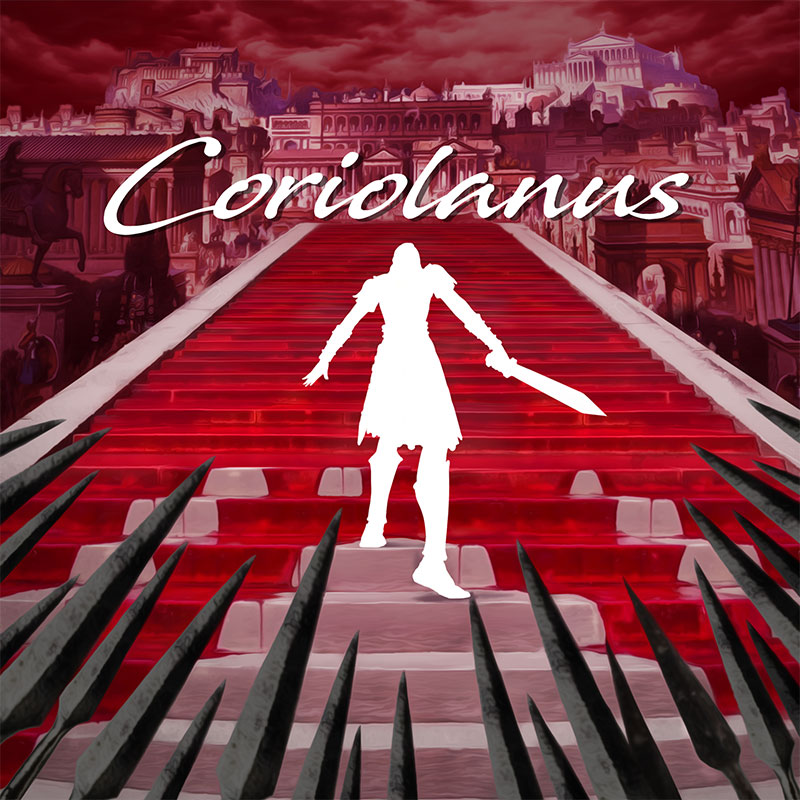 Dive into ancient Rome where General Caius Martius (soon-to-be-named Coriolanus) calls for an end to democracy in the midst of a tumultuous relationship between the people of Rome and the aristocracy. Brimming with political unrest, war, and questionable leadership, Coriolanus asks us to consider in what ways has history repeated itself to this day? Featuring an all-women and non-binary cast, get ready to experience Coriolanus like you never have before.

Listen on Play On Podcasts

Bay Area director, actor, and producer Sean San José takes on the themes of power and politics in his version of Coriolanus, Shakespeare’s exploration of militaristic might and political folly. San José’s take on this little-known classic reimagines the text to be spoken by and for a community of “others.” The translation, which brings Shakespeare’s language into our era, rendering its thematic and dramatic power broadly accessible, is powered by a reexamination of populism in our current political moment. Rehearsal and Staged Reading directed by Jeff Whitty with full cast as part of the Play On! Translation Festival in NYC.

A livestreamed exploration of Coriolanus featuring actors from across the country under the direction of Raphael Massie.

UNCSA Presents a Contemporary Take on a Shakespearean Classic

Queering ‘Coriolanus’ With a Non-binary and Women-identifying Cast

Shakespeare’s greatest power couple is Mark Antony – one of the three leaders of the Roman Republic – and Queen Cleopatra of Egypt. But Mark Antony will need to make a choice: love or duty and honor.

Tormented by his father’s death and brimming with revenge, Hamlet seeks to avenge his father. As he plots to expose the truth, the lives of Hamlet’s friends and family unravel around him with tragedy on the horizon.

In one of Shakespeare’s most epic political tragedies, this play follows the journey of Julius Caesar and what led to the tragedy of his assassination.

One of Shakespeare’s most famous plays, King Lear is a play about loyalty, love, and the paternal toxicity. After Lear rejects his eldest daughter in a moment of insecurity, Lear is faced with the harsh reality that the one he has banished is the only one that can save him and his kingdom from destruction.

After Shakespeare’s famous Weird Sisters devine to Macbeth that he will be King of Scotland, Macbeth and his wife plot to remove King Duncan from his throne by any means necessary.

Othello, General in the Venetian military, finds that he is up against all odds. His wife, Desdemona, has been disinherited by her father after their secret marriage is revealed. Iago hates him for refusing his promotion. And Roderigo is after Desdemona’s heart. Othello is manipulated into a tangle of lies, and Desdemona stands to reap the consequences.

Two noble households are in conflict, and two young lovers, one from each house, find themselves in an impossible situation: They must choose between love or family.

The popular Timon of Athens is known to give gifts to his friends and hold great feasts, flaunty his wealth. But when he runs out of money and the creditors come calling, his friends turn him away. Condemning both his friends and the city of Athens, Timon leaves to contemplate how to best take his revenge.

Roman general Titus Andronicus returns with prisoners after a war with the Goths, including Queen Tamora, her sons, and Aaron the Moor. But when emperor Saturninus releases them, Tamora and her sons inhumanely punish Lavinia in revenge. When Titus discovers this vile act against his daughter and who was responsible, he devises his own revenge plan.

As war rages around them, Trojan prince Troilus falls in love with the beautiful Cressida. But after she is traded to the Greek camp and agrees to be with another man, Troilus witnesses her unfaithfulness and vows to focus his efforts into winning the war.

An eternal friendship between the kinsmen Palamon and Arcite is shattered instantly when they both fall in love with the Amazon Emilia, daughter of Hippolyta and an Athenian. Despite all the odds against them, especially while on enemy territory, both men devise a way to duel for Emilia’s hand in marriage.
Skip back to main navigation